Using the right motor oil is part of your motorcycle’s care and maintenance routine. Instead of using traditional machine oils, it’s now better to use synthetic oils in your bike like Motul 5100 Synthetic Blend Motor Oil-10W40. While synthetic oils are comparatively more expensive, it’s mainly because of the many benefits it offers.

Like most synthetic oils, Motul 5100 also resists possible oxidation, thermal breakdown and oil sludge problems in the engine to prolong its life. It can also improve the fuel economy in some engines and provides for extended oil drain intervals. The extended interval means that less used oil waste is generated.

In a Hurry – Check Availability Here 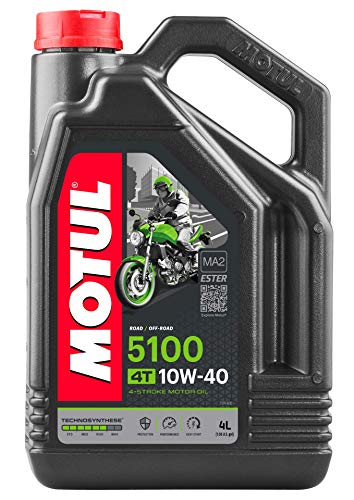 In addition to the normal benefits offered by synthetic oils, Motul 5100 and all other Motul oils also offer the added benefit of ester technology. This technology combines the best performing esters with customized and specific chemical additives to increase the lubricity, power and safety of the oil.

Patented intense pressure formula to save the gearbox

Another special feature of this oil is its patented formula comprising of extreme-pressure additives. This formula prolongs the engine gearbox life by reducing wear and tear. Using Motul 5100 Synthetic-Blend Motor Oil in your bike’s engine can thus help extend your gearbox’s life.

This special formula contains additives like rust and corrosion inhibitors that protect the internal motorbike parts. Besides, the anti-foam agents in the oil reduce the possibility of foam formation in the engine which in turn provides for better lubrication.

Ideal and safe for use in bikes with catalytic converters

As an engine oil is vital for your engine’s working and functionality, instead of using just any oil, Motul 5100 synthetic motor oil is a better oil for your bike. Regular and continuous use of the oil minimizes the normal and unavoidable wear and tear, and friction caused in the engine.

Though it’s a bit on the expensive side, if you compare the increased fuel economy it offers and the extended drain interval, it’s high rate is justified. You actually don’t end up spending much more than you would if you used cheaper oil with fewer additives and benefits. Besides, it’s patented formula helps reduce extreme pressure build-up in the gearbox, which in turn extends its life. The ester technology used in the oil’s manufacture increases the oil’s lubricity for increased engine performance.

There are not many other brands with ester technology offering competition to the Motul 5100 synthetic blend motor oil. The only competition it has is another Motul engine oil, the Motul 300V Synthetic Motor Oil -10W40.

It has about 60 reviews on Amazon and is priced a little higher than the Motul 5100. However it also boasts of double ester technology, is recommended for use in 4-stroke engines and can be used in motorbikes which may or may not have a catalytic converter. This oil is also above prevailing oil standards and passes the JASO T904 test.

Taking a look at the pros, cons and features of the Motul 5100 Synthetic Blend Motor Oil 10W40, it seems to be an ideal bike to use in your 4-stroke engine motorbike. The oil’s patented extreme pressure formula implies that the oil has additives like anti-foam agents that minimize foam formulation and rust and corrosion inhibitors that protect your bike’s interior parts. Its ester technology provides the oil with increased lubricity which in turn minimizes friction production and thus protects the oil.

The oil may seem to be a bit expensive, but the high cost is compensated with the increased fuel economy and extended drain interval the oil offers. Besides, the oil is conveniently packaged in different 1 Lt, 4 Lt and gallon bottles to buy according to your budget and usage.

It is true that its counterpart Motul 300V Synthetic Motor Oil 10W40 does offer some competition to this oil. However, it’s a bit more expensive than the Motul 5100 oil. And while it’s also formulated using ester technology, it’s not formulated to withstand extreme pressures and thus will not offer much safety for the gearbox.

All this shows that there’s no need to think twice. You may as well start using Motul 5100 Synthetic oil and you will immediately notice the difference in your bike’s performance and pickup. However, to be on the safer side, it’s always better to refer to your owner manual once before using it to ensure it’s safe to use on your bike.

As an engine oil is vital for your engine’s working and functionality, instead of using just any oil, Motul 5100 synthetic motor oil is a better oil for your bike. Regular and continuous use of the oil minimizes the normal and unavoidable wear and tear, and friction caused in the engine.

Can you switch from regular oil to synthetic oil?

Can you switch from regular oil to synthetic oil?

How is synthetic motor oil made?

What synthetic oil is better for older cars