This is a 100% Synthetic Double Ester oil that is specifically designed for use in highly modified racing engines. It is highly durable engine oil offering more than 5 times the normal film strength in other oils. Besides, it also has the distinction of recording a 0% shear loss on Bosch ASTM D6278 test.

Features at a glance 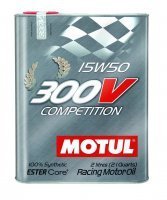 This is complete, 100% synthetic oil that ensures minimal friction between the engine parts. This, in turn, provides for smooth shifting. It also helps the engine run at a much lower temperature, about 10 °C lower than other engine oils. This is helpful for your bike because a cool engine leads to reduced and minimal wear and tear on the engine parts.

Increased fuel economy The Motul 300v 10w50 engine oil provides for improved fuel economy in your bike. Not only does your bike end up performing better, but the oil change interval is also extended to at latest 6,000 miles, so you end up spending less for your oil.

Besides, smooth shifting leads to reduced stress on the engine and consequently reduced fuel consumption and also a longer engine life. Definitely, one of the best oils which protects your engine well in between changes.

Has a fluorescent predator blood green colour The Motul 300v 10w50 motorcycle engine oil has an interesting feature in its colour. It is pre-doped with UV reactive dye, which makes it all the more easier for you to spot leaks when it spills on the floor. This is because the dye gives the oil a really neat and unique fluorescent green colour.

Ans. Yes. This oil is specially formulated for use in racing bikes. Motul has other full synthetic oils meant for automobiles.

Ans. Yes, it is safely used in many Ducati shops. You usually need 4 Lts. of the oil, but it is better to check your manual for the recommended amount and viscosity for your bike.

Ans. No, it is not safe, nor is the oil designed for use in boats. This is because it does not contain the required operation additives.

Q.4. Is the oil safe for use on wet clutches?

Ans. It should be okay to use it on wet clutches because the oil is any way designed for use in 4 stroke sports bikes. However, do not use any auto oil on wet clutches!

If you have been looking for an affordably priced motor oil for your racing bike’s 4 stroke sports engine, then the Motul 300v 10w50 motorcycle engine oil should be just what you need.

It is specifically designed for use in racing bikes to effectively sustain the high speeds, extreme power and heat in the engines. It also provides for better fuel economy with its extended change intervals and extremely strong film strength.

However, like any other engine oil, it is always better to first check with your user’s manual, and your mechanic before making the change, just to be on the safer side.

It is specifically designed for use in racing bikes to effectively sustain the high speeds, extreme power and heat in the engines. It also provides for better fuel economy with its extended change intervals and extremely strong film strength.

Can you mix synthetic oil and conventional motor oil?

The Best 3 Transmission oils for my Harley Davidson

The Best 3 Transmission oils for my Harley Davidson

What are the meanings of ATF and Power Steering Fluids