So, the bad news is that Liqui Moly products come with a German dialect. Especially if you are considering purchasing the Leichtlauf High Tech engine oil, you will have to twist your tongue alot. It has to come deep down from your vocal cords, or the retailers might deny you the ooey-gooey goodness which comes with this synthetic oil.

Jokes apart, the good news is that Liqui Moly has earned a very solid reputation in the market. The company was founded in 1957, but it wasn’t until 2018 that they became part of the Wurth Group. The latter is a shark when it comes to acquisitions and mergers of oil company stocks.

This transition time period from 1957 to 2018 instills an untiring campaign towards perfection. Although they took off as a traditional engine oil creator, they remained consistent when the market moved to the synthetic oil trend.

This article isn’t specifically about Liqui Moly synthetic motor oil, or the Leichtlauf series. If you are looking for a review, you should come back again for another follow-up post. This write-up is more about our first-time hands-on experience with the product.

Previously, we were extensively dabbling in Castrol, Shell, Royal Purple, Mobil 1 and such other synthetic oil variants. Although the companies are different, their products work almost the same way as long as you are a low tier budget customer.

If you are considering switching to race standard platinum quality engine oil, that’s where Liqui Moly comes in. It is designed for Formula cars and mostly sports cars that we often see on the driveway. Naturally, with a powerful engine, the demand for high-quality synthetic oil soars through the sky. That’s what Liqui Moly Co. had in mind – i.e. to increase their synthetic engine oil standards at a benchmark level. 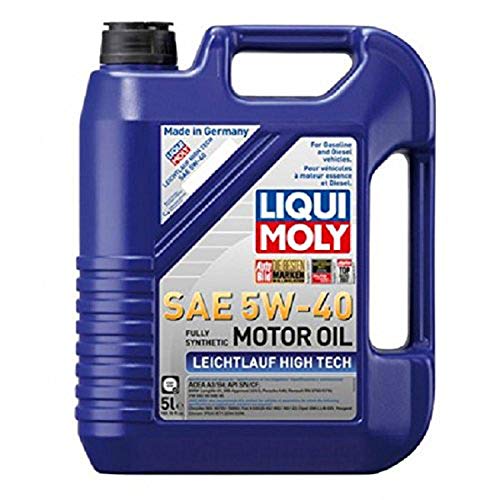 Bringing Worlds Together Under One Roof:

Most of our engine oil testers are settled in the U.S. Sometimes when we have to test a European brand, we get it shipped right across to reviewers’ doorstep. They spend a few weeks with the oil sitting in their car engines, and then make deductions that are sent over to us. Anyhow, the overall feedback from Liqui Moly Leichtlauf quarts was very positive. Part of the reason for a higher satisfaction rate is because German manufacturers create a high-quality variant of Liqui Moly synthetic oil. The ones situated in the U.S., those plants create a slightly inferior quality of the same oil.

Anyhow, the point is that we noticed longer OCIs, alongside a very stable sulfur content combination of the oil itself. When stacked up against other companies’ synthetic engine oils within the 5W-30 bracket, Liqui Moly takes the lead due to a widely accepted application criterion. It’s just that the oil is fashioned in such a way, that it keeps both American and German engine needs in perspective.

Liqui Moly OCIs in Germany average around 18.600 successfully completed miles. This is one more reason for the U.S. market to prefer this oil brand over those that are manufactured inside the U.S.

we noticed that both the Leichtlauf High Tech and Special versions were capable of meeting the demands of BMW LL, and Audi TF series engines quite easily. That means that if your car is somewhere within or under the BMW and Audi tier engines, you are good to go.

Keepin’ It Real with a Sludge Free Engine:

That black water like sludge is a car owners’ worst nightmare whenever the engine oil hub cap is opened. At one point, we were so used to seeing that black watery substance which ones used to be thick golden engine oil that we decided to switch to synthetic engine oil. Liqui Moly, Mobil 1 and such other synthetic motor oils are very high in viscosity. Also, the oil is reportedly customized/ refined at a molecular level, which helps to repel sludge formation in every possible way.

When you pour your engine oil for the first time, it goes through intermittent metal-on-metal contact. If the oil is of inferior quality, it picks along residual deposits from different engine areas. Over time, the traditional viscosity thins down to water level, and the color of the oil goes full black. As a proud motorist, this is the kind of scenario which you need to avoid in every possible way.

When running at optimal levels, engines are blazing hot. The temperatures are so damn high that you could evaporate your skin if it ever makes contact with the engine. The engineers behind the Liqui Moly brand teamed up with data scientists to come up with a product that would enhance itself over gradual use. You ever heard the expression that wine ages better with time? That’s sort of a philosophy that Liqui Moly GmbH incorporates in its platinum standard synthetic oil products. Over time, the oil matures to offer a frictionless experience to the engine block.

Label Your Engine Oil Your Way:

In the end, no matter which synthetic engine oil you go for, you are labeling it in your own way. It means the overall maintenance factor, environment variables and many other elements that you don’t take into account. Any high-quality synthetic engine oil will mislead you if its application is careless. Make sure that you know your engine, and your car’s overall condition before making that “switch”. Best of luck, and don’t forget to share your valuable input through the comments section below.

Why Mobil 1 Synthetic Motor Oil Is Better than Conventional