14667885 - indianpolis, in - jul 28, 2012: matt kenseth (17) and crew prepare their car for a practice session for the curtiss shaver 400 presented by crown royal at the indianapolis motor speedway in indianapolis, in.

Ever since we published Valvoline 20W-50 VR1 Synthetic Engine Oil review, we have received a lot of emails about the oil’s performance in regular cars. If you are enticed by the “Racing” label and plan on using the oil for your daily use car, don’t do it. Just don’t. Period.

Okay, since it says racing oil on the product packaging, people believe that the oil will bestow some kind of magical properties on regular car engines. If you are under the impression that Valvoline VR1 will act like Red Bull for your family car, then it’s not going to happen. At best, the engine oil will cease to perform and acquire the shape of solid sludge. As a result, the car engine’s RPM will be affected to a great extent.

Think of using a sloppy quality synthetic engine oil during extreme winter conditions. The oil gets solid and it prevents the engine from turning over smoothly. That’s what happens when Valvoline VR1 is used for regular non-racing cars. It would be better to admit that this oil was made for racing cars, and other street-legal racing vehicles, such as Mustang, Camaro 406 and vice versa.

Meanwhile, for race cars, Valvoline VR1 should be changed after every 500 miles. Racecar engines have high RPM, and oil consumption is higher as compared to regular car engines. Therefore, it is best to change the oil once it has reached, or is about to reach the 500-mile threshold.

What To Do If I Already Used Valvoline VR1 For My Regular Car?

In case you acted on the impulse and got carried away by the race engine oil hype, perhaps your mistake can be redeemed. It depends on how long you’ve had the oil left in there vs the current performance stats of your car’s engine.

We had one case where a user emailed us asking about a solution. This person had already used Valvoline VR1 on his regular car, which was just a family vehicle by all means. He was under the assumption that the engine’s performance will boost, but the oil turned into sludge and the engine barely managed to turn.

The solution is to drain the engine and refill it with your regular engine oil; the one that you have been using already. If it is Rotella engine oil, switch back to it. Alternatively, check the spark plugs and engine headers to make sure that everything is in order. Sometimes, a sudden change of engine oil causes the headers to malfunction. Spark plugs also loosen up, so it is better to check and make sure that other components of the engine are working fine.

Why Valvoline VR1 Is Better Than Other Brands?

Within the race engine oil category, Valvoline VR1 tends to perform better because of the boosted levels of Zinc and Phosphorous. Both of these chemicals act as antiwear compounds in synthetic engine oil. As a result, the engine’s performance is boosted to above optimal levels, which makes it suitable for race cars.

Since race car engines have extremely high RPM, the oil requires additional lubrication, perfect viscosity and just the right amount of anti-wear additives for maximum performance. In that realm, Valvoline Co. managed to get the percentages right – and that is exactly why this oil is the number one preferred brand among race car owners from all over the world. 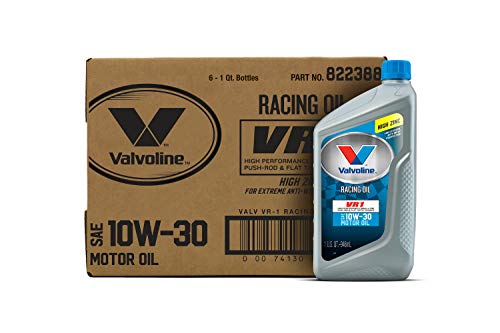 Be Wary of Excessive Use:

While the extra layer of Zinc and Phosphorous shield the engine against metal-on-metal damages, the oil also damages the catalytic converters. These converters are also installed in sports bikes that are above 600CC category. Now if you don’t know about Cam Converters and Catalytic Converters, it is better to talk to a professional or someone who has experience with both engine types.

We can explain here, but it will take the write-up off course. It is better to revisit our website for another updated post about catalytic converters vs synthetic engine oil. For now, you should bear in mind that if you are planning to use Valvoline VR1 racing oil, make sure that it has the “NOT STREET LEGAL” label on the bottle.

This label means that the oil is specifically meant for race car engines. On that note, one single refill will last you about 450 – 500 miles – and that too if the car is used for actual racing. Otherwise, the catalytic converters are still going to get damaged if the car is going to sit in a garage for several weeks or months on end.

Alternatively, if you own a street-legal variant of a racing car, then go for the gray-colored bottle of Valvoline VR1 engine oil. This product description on this bottle mentions that the oil can be used on street-legal sports/ race cars for up to 3,000 Miles between average oil change intervals.

While buying any type of synthetic or non-synthetic engine oil, make sure that the API rating of the engine oil matches that of your car’s engine. If there is a difference, the resultant effect will most likely cause the engine to malfunction.

For more details, you could send us an email explaining your experience with Valvoline race car oil series. Alternatively, you can also share your thoughts through the comments section below. Our readers would love to know more about such controversial topics in detail.