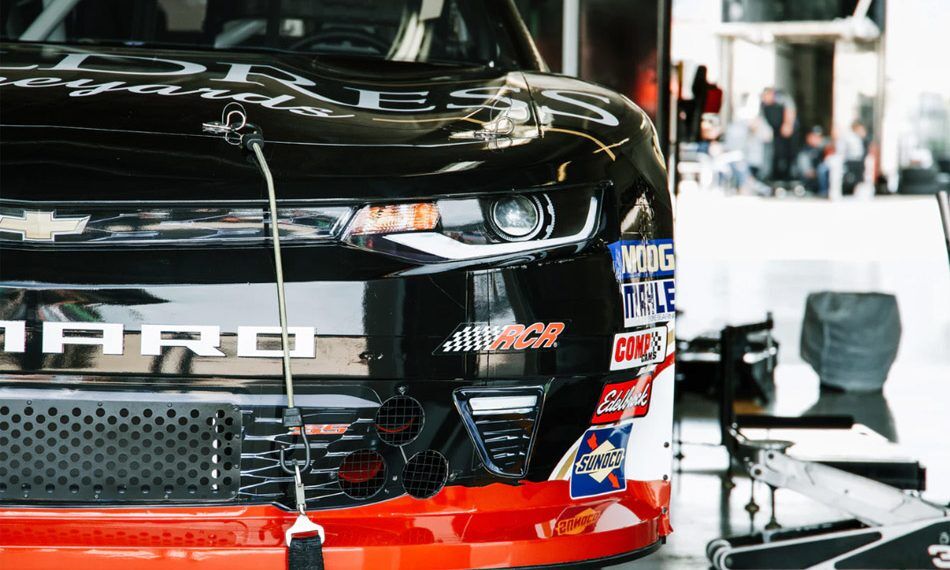 Photo by Chase McBride on Unsplash

Below is some useful information on engine oil and NASCAR engines. Certain teams use specific oils as there is no NASCAR specific oil as it comes down to who is paying the most for the teams sponsor. Engine builders and oil suppliers work closely together to develop a specific type of oil for their engine, so it is safe to say they don’t just go down to Walmart to top up the oil supply for the weekend.

Viscosity is a measure of resistance to flow, NASCAR engine temperature runs very high, they, therefore, require oil with a high viscosity.

NHRA Pro Stock engine run a temperature of about 100F which is considerably low, a NASCAR Sprint Cup engine reach temperatures of up to 220F of oil temperature while a World of Outlaws 410 Sprint engine reaches 300F, these engines all operate at a different temperature, Each of the three engines, therefore, run on different oil viscosity. Here is how NASCAR Compare;

The letter “W” reflects the “Winter” cold start for your specified oil. Oils with a lower number before the “W” typically have better cold start protection. The number after the “W” is an indication of flow rate at 212 degrees Fahrenheit,

What Synthetic Oils do NASCAR Engines Use?

Nascar utilizes customized racing engines and as such, they operate at very high rpm, for the engines to run smoothly without overheating, they require an advanced specially formulated engine oil.

The oil used in NASCAR is specially formulated with no regard to the emissions equipment life, these oils have evolved with advancement in engineering, and can accommodate a wide range of functions such as long-term emissions compliance and catalytic converter preservation.

NASCAR synthetic oil is chemically engineered to endure the 500-mile long race, this is characterized largely by oil chemistry formulation, they have additives that are specified by the manufacturer, these additives add a combination of a performance boost in terms of efficiency, protection, and lubrication. The oil keeps the engines’ internal workings clean and seamless for optimized performance, The oil currently in use is the Mobil1 synthetic oil and can withstand the extremities of the 700 plus horsepower on NASCARs.

How Much Oil Does a NASCAR Engine Hold?

It might come as a surprise to you that in this age of highly advanced suspension and engine technology, that the major technological advancement in NASCAR vehicles is its motor oil. Most of these cars have one motor oil for the 500-mile race and one more for the qualifying to determine their position, These NASCAR vehicles carry a lot of oil in their reservoirs.

An ordinary personal car carries four or five quartz, these highly customized stock cars carry up to seven gallons of oil. They have a much larger oil reservoir behind the driver seat. What’s more, the oils are utilized very efficiently and has very minimal oil loss.

You need to remember that these cars run at very high rpm and horsepower meaning there is no room for errors, they are therefore able to utilize such high quantity of oil with precision as it moves from the back to the front and back again repetitively. Their system holds it and needs this much because of this constant transfer of oil back and forth through the line.

Can Motor Oil Make A Difference In NASCAR?

The oil in your NASCAR engine might be the difference between winning and losing, it is the reason why millions are being pumped in synthetic oil technology and new formulations are in different stages of research and development. Less friction also means that the car will produce more horsepower.

High-quality oil should reduce friction as much as possible do prevent the car from breaking down, and also for efficiency. If you watch a NASCAR race you might notice that there is a generator attached to the cars while they are still lined up on the pit road, these generators have only one purpose, and that is to heat the oil to the highest temperature possible, this makes the oil to flow more effectively in the qualifying laps.

What brand oil does NASCAR use?

NASCAR teams can not afford any breakdown, they, therefore, rely on oil specially formulated for high endurance for the 500-mile long race. Mobil 1â ¢ has been the oil being used by NASCAR for a long time. For decades Mobil 1 has been the designated brand and is the “Official Motor Oil of NASCAR®” and this is set to continue in the next two decades with the signing of an agreement by ExxonMobil and NASCAR® at the NASCAR Fuel For Business meetings in New York on August 3rd, 2017.

The two companies have enjoyed a longstanding mutual business relationship which has been marked by technological innovation and marketing,

Statistics from ExxonMobil show that more than 50% of the teams competing in a NASCAR national series, that is, the NASCAR XFINITY SERIES, NASCAR Camping World Truck Series and, Monster Energy NASCAR Cup Series. These platforms provide engineers at ExxonMobil a testing ground for the general consumers and race fans,

What makes NASCAR engines so powerful?

A NASCAR engine is assembled differently than a normal car engine. They produce higher horsepower because they are custom made with precision balanced parts. The connecting rods, pushrods, pistons, and valves are all matched and weighed accurately.

A basic engine might have similar working like that of a NASCAR engine, but that of a NASCAR can endure rpm of more than seven thousand for at least three hours a fete that would ordinarily destroy a basic V-8 engine,

Nascar engines are built to endure extreme conditions, for example, a NASCAR V-8 engine works well very high-temperature and pressure, the temperature inside can reach 2000 degrees Fahrenheit and pressure of 1500 psi. In essence, they feature heavily reinforced parts to handle these conditions,

Why is NASCAR so Loud?

If you have ever attended any NASCAR event, you might have noticed that the vehicles on the track have insanely loud pipes. This noise from NASCAR engines is because they do not have mufflers, mufflers are used for suppressing the quantity of air and fuel that passes through an engine. the lack of a muffler coupled with high horsepower and rpm creates the insane noise that you typically get from NASCAR.

What are the Specifications of a NASCAR Engine?

The innovations of NASCAR engines can be equated to an arms race, they are always hungry for more power and torque. According to NASCAR rules, you can disassemble, assemble and rebuild Spec Engine, you are however prohibited from making modifications to the components as stated in the rule book. This freedom to customize engines has driven up innovations with aftermarket parts. Some of the companies in the production of aftermarket parts are;

What are Some of the NASCAR Rules?

The engine capacity must be 358 cubic inches ( 5,867cc), this is to limit the amount of horsepower produced.

When the cars are on track e.g. Talladega Superspeedway and Daytona International Speedway, The engines of the cars must be fitted with a restrictor plate, this is to cut airflow between the engine. This is done to put a cap on racing speeds,

How Much Does a NASCAR Engine Cost?

The race track is an expensive affair even for even the most seasoned competitor. A normal NASCAR is not made for racing and as such will cost you less, while its race going counterpart costs mind-boggling figures.

Switching from a carburettor to electronic injection system alone will cost you an additional $10,000 per week

This staggering cost of racing has forced the smaller teams to share the same engine in up to three races in a row. The cost keeping your engine running at full capacity will cost you $400,000 but some powerhouse teams such as Joe Gibbs Racing, RCR, Roush Fenway Racing, and Hendrick Motorsports offer mechanical and technical assistance to smaller racing teams at $100,000 for every race,

Why NASCAR engines run so hot?

A normal car on the road runs at about 200 degrees Fahrenheit, NASCAR engines run at 40%, these high temperatures would ordinarily fry a normal car. NASCAR teams ran their cars that hot so that they can go faster. This is a new technology and is connected to aerodynamics.

It entails taping up the radiator inlet to get less air coming in, making the car slippery and so they can go faster around the track.

What transmission fluid does NASCAR use?

Do All NASCAR Use The Same Engine?

The displacement of NASCAR is the same. The cars in NASCAR are separate from the production cars, for example, a NASCAR going Chevrolet has different from a production Chevrolet. NASCAR regulations state the spring rates and track bar at each corner, they also specify the height of the track surface to the nose, this has regulation has made the engines to be similar and interchangeable on NASCAR.