Although Ducati created the all-new Shell Advance 15w-50 engine oil for Ducati bikes only, I have seen many dudes using it in different models. There are some use cases where KTM Duke and other 250 series bike owners were more than satisfied. The bottom line will always be to go with company recommendations.

If you bought your motorcycle as a second-hand machine, consult with the previous owner. If he’s not available, perhaps you have an old mechanic friend who knows all there is to Ducati Shell Advance 15w-50 Engine oil, etc. He may or may not agree with your choice of brand. So, leave the discussion for that particular day.

What’s so special about the 15w-50 Series Ducati Motorcycle Oil?

Ducati and Shell have been partners for over 20 years now. Back in 2017, they exclusively released the 15w-50 Series Ducati Motorcycle Oil as part of the reasons behind their association. Also, there was a strong head on competition with Motul, Mobil 1 and Castrol to release a synthetic engine oil specifically for bikers.

It wouldn’t be an understatement to suggest that this particular oil is specially made for track bikes. However, many proud motorcycle owners use this oil as part of the trust factor. These users were also inspired to prefer Ducati Shell Advance 15w-50 over other brands because the oil was reportedly performing well already on race tracks.

According to the company correspondents, this engine oil is “born from innovation garnered during thousands of hours of miles on race tracks.” If that statement is true, then it is safe to assume that your engine oil change intervals will average around 7,000 – 7,500miles. After all, it is a synthetic oil breed. So, higher mileage is welcomed by-product of switching to something better for your engineneeds purpose. 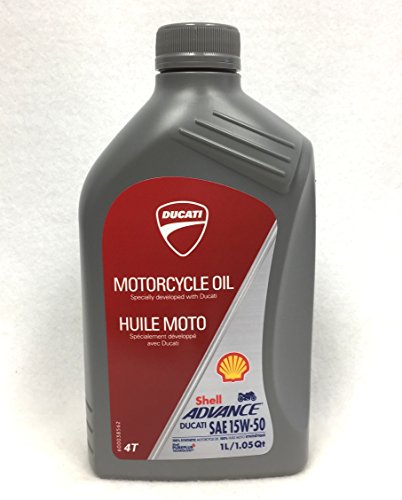 Since the purpose of our reviews is to highlight details from an unbiased perspective, there are some setbacks that you need to know. For instance, and this is entirely our personal opinion, don’t take Ducati’s word for engine oil intervals.

For starters, 7,500 miles is a lot of “miles”. When you average it into Kilometers, it gets around 15,000 Kms before your engine sees the light of the day. With all due respect, you are going to shear down your motorcycle engine without even knowing it.

Also, after such a long interval, the engine oil will turn into a black slick with water like viscosity. While some people still argue that they’ve had no issues with changing their Ducati engine oil after 7,500 miles, there is a VERY high probability that these folks were small bike owners. If you are going to be using this oil for a 600CC+ motorcycle, you need to shorten your intervals.

On that note, dirt bikes and 250 – 300 CC sports bikes will perform well over 7,500 miles. Going the long distance – and that too on a high horsepower motorcycle will put you at a disadvantage. It is based on engine head performance and pistons rotation speed. The higher that speed is, it will burn through the engine oil, even if it is “synthetic”.

Here at ‘My Engine Oil Needs’, we are of the view that shorter maintenance intervals churn out maximum performance in any machine. Be it a motorcycle or a car engine, if you are taking care of overall maintenance factors, your machine will continue to outperform the rest of the vehicles on the block!

As mentioned in ‘Ducati Desmoquattro Performance Handbook’, author Ian Falloon couldn’t overemphasize maintenance factor alongside regular engine oil change intervals. He said that the harder a machine is used, irrespective of whether it is operating on a Ducati or Castrol engine oil, the more maintenance it will require. It is a natural law of physics; higher revs take a toll on the wearn’ tear effect.

In 1974, Ducati and various other companies did not have a trend of releasing a handbook for new motorcycle owners. Those poor souls had to rely on intuition and trusty old “word of mouth” from their friendly neighborhood mechanics. However, the Desmoquattro manual set aside that old “no handbooks” mentality and really helped push the competition to the next level.

This engine oil is more suited to motorcycle owners in warmer climate areas. According to Ducati officials, there is a 71% probability of reduced engine friction based on the unique formula of this product.

Ducati likes to favour the use of this engine oil with Ducati motorcycles only. Obviously, this is a self-promotion tactic, but we all understand that it is literally impossible to buy a new motorcycle with a quart of your favourite oil. However, if that pleases you, go ahead, we won’t hold you back on it.

The Best Is Yet to Come!

Ducati recently announced an extension of their agreement with Shell. Let’s hope they keep on releasing new products for both motorcycle and car owners from all over the world. According to official reports, this move ensures the solidifying of an age-old traditional relationship between both partners.

Are there any alternatives to this engine oil?

Is my motorcycle engine rating important?

What is the best course of buying decision if I don’t have any knowledge about engine lubricants?

Best of luck out there. Don’t forget to send us an email, or comment through the section below with your thoughts on this engine oil.

suited to motorcycle owners in warmer climates According to Ducati there is 71% probability of reduced engine friction. It also implies that as long as you are using synthetic engine oil, it will retain its chemical properties for as long as possible.