Most car owners are either switching to or use synthetic motor oil in their vehicles for the oils’ various benefits. While there are quite a few brands to choose from today, Castrol 03057 GTX MAGNATEC 5W-30 is one of the few oils with added benefits.

In A Hurry – Check Out the Availibility Here 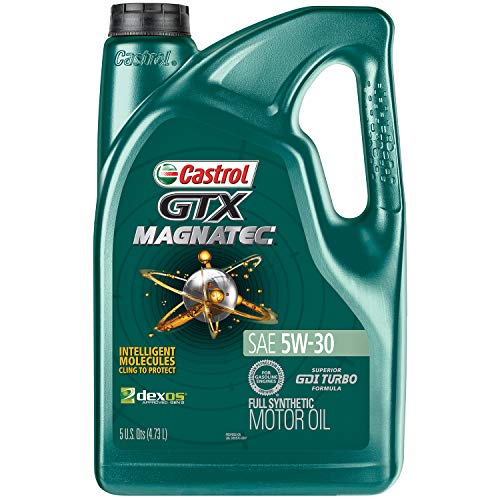 Like most synthetic oils, the Castrol 03057 GTX oil helps reduce engine wear and prolong its life. This is because of the frictional additives it has which reduce the friction that occurs between engine parts. This reduced friction means the engine parts do not wear out that much and instead, move fluently in the engine.

Yes, though you may feel that the oil is more expensive than conventional motor oils, it saves you money in the long run by reducing your fuel expenses. It keeps the engine cool and reduces friction between engine parts. With time your vehicle runs more miles per litre of fuel, which means it consumes less fuel than it used to.

The specialty of Castrol 03057 engine oil is that it is formulated much differently from other synthetic motor oils. The oil molecules are specially created to cling to your critical engine parts in all driving conditions, even when the engine is not running, which helps reduce engine wear and tear.

You may not know it but it’s during the first 20 minutes of your car warming up that it undergoes maximum engine wear. It can undergo as much as 75% of engine wear in this period because whenever you stop the car, the oil drains off the important engine parts to the sump. As mentioned above, things are different here because the oil’s molecules cling to the engine parts just like a magnet does. It, in turn, forms an extra protective layer for the parts. This proves very useful and integral to your engine when it needs it the most, like while starting the engine and through the warm-up period. And with most car trips lasting twenty minutes and shorter, this feature of the oil keeps your engine protected through the trip.

The protective layer of the Castrol 03057 engine oil on your engine parts eventually leaves them about 4X smoother than it usually is. Smoother parts, in turn, mean reduced friction and consequent minimal engine wear.

Depending on your usage, you can extend the oil change interval for the Castrol 03057 by as much as 6,000 miles. Of course, it all depends on your vehicle usage. The interval gap may be much lower if the engine regularly heats up like during races or if you are usually stuck in stop-and-go traffic.

Looking at the many features and benefits of the Castrol 03057 GTX MAGNATEC synthetic oil, it seems to be the perfect oil for your engine and car. Unlike most other oils, it doesn’t just reduce engine wear and tear but also forms a protective layer on the parts.

This is thanks to the oil’s special formulation where the molecules are engineered to cling onto the engine parts like a magnet. This proves helpful to the engine when it needs protection the most, during the start-up and warming period.

As mentioned above, there are many similar synthetic oils around that make you wonder if this is the best oil for your car or not. One such synthetic oil giving the Castrols competition is the Valvoline High Mileage with MaxLife Technology 5W-20 synthetic blend motor oil.

This oil is formulated to address the special needs of high mileage engines. It is a blend of synthetic and premium conventional oils with other agents like anti-wear additives, friction modifiers and extra cleaning and seal conditioning agents. This is the ideal oil if your engine has more than 75,000 miles, and even for new and rebuilt engines.

Now if you feel that you now find it even more difficult to choose the right synthetic oil for your car’s engine, well here’s a briefing of these two oils. The Castrol 03057 is pure synthetic oil that helps reduce your engine wear and tear like other synthetic oils. With the right use, it can even extend your oil change interval.

However, the strongest feature of this oil that sets it apart from other oils, including the Valvoline High Mileage synthetic blend motor oil is its special oil formulation. With this unique formulation, the oil molecules are designed to not just sink to the sump in all driving conditions and while idle, but instead cling onto the engine parts. This forms an additional and helpful protective layer which protects your car at all times, especially when it needs it the most, during the start-up and warming up period.

On the contrary, if you look at the Valvoline High Mileage motor oil, it’s not pure synthetic oil, but a blend of synthetic and conventional base stocks with additional seal conditioning agents. So the oil may not be safe or meant for use in some engines and vehicles.

Besides, while it mentions that the oil is safe for cars with rebuilt engines and engines which have run more than 75,000 miles, there is the risk that cars older than 1990 may not run well because of its additives. This is why it’s better to use this oil only after consulting your mechanic or doing some research.

And while the Castrol 03057 does seem upfront to be a better, and possibly the best motor oil for your car, it is always better to check your owner’s manual and make doubly sure before making the change.

Looking at the many features and benefits seems to be the perfect oil for your engine and car. Unlike most other oils, it doesn’t just reduce engine wear and tear but also forms a protective layer on the parts. This is thanks to the oil’s special formulation where the molecules are engineered to cling onto the engine parts like a magnet. This proves helpful to the engine when it needs protection the most, during the start-up and warming period.

How often to change differential fluid

Everything you need for a complete oil change on your V-Twin.

Think of this product as your temporary fix to any transmission

Overall the Red Line Heavy ShockProof Gear Oil is a no