Can you use transmission fluid for power steering fluid? 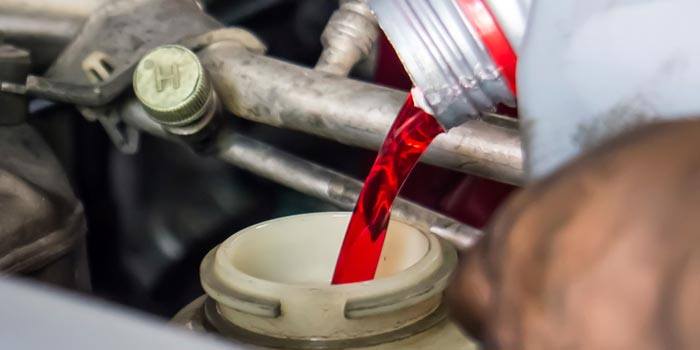 Owning a car brings with it a lot of responsibilities. It is only with the right maintenance will it serve you well. You have to remember so many things, like the different belts and the different fluids, having their individual purposes. You have fluids like tranny, brake and power steering fluids which you need to constantly top up, and sometimes flush out and refill to keep your car in tip top condition.
No matter how well equipped you may be about all this, you may at times either accidentally substitute them or make substitutions because of no other option. This is when you ask yourself questions like if you can use transmission fluid for power steering fluid. Though it’s not mentioned in your owner’s manuals, both are the same. But when it comes to using transmission instead of power steering fluid, it all depends on the vehicle make and model.

So while some say its okay, some are entirely against it, and suggest substituting one for the other only in an emergency. This is mainly because larger amounts of the wrong solution can end up deteriorating and destroying the system parts. While the ATF may work for some time, it in the long run affects the pump and gearbox seals. It was in the late 70s or perhaps earlier that it was safe to use ATF in the power steering pump.

It’s because the cars then didn’t use any sophisticated or lightweight materials in its construction. In fact, the power steering systems of these cars were made using crude materials, making it safe with ATF. It’s the modern vehicles that are built using delicate parts and subtle engineering techniques that make it necessary to use only the specific products designed for them.

The wrong product may not meet the system’s specific requirements, and may be harmful to the vehicle. While it’s considerably safe to swap in case of Ford and GM models, a swap can ruin a BMW, Mercedes Benz, Audi or Honda.

Sick of Armstrong Steering – Here Are Our Top Picks

What is the difference between power steering fluid and automatic transmission fluid?

You can understand whether it’s safe to replace power steering fluid with ATF better if you compare both the products, and know the differences between the two. While both ATS and PSF are hydraulic, they are not the same.

ATF is used more for cleaning and friction while PSF is used for lubrication and to reduce friction between the power steering parts. PSF also reduces excessive temperature build-up, lubricates the steering pump and gear unit and provides hydraulic pressure to the system parts.

Difference in colour and smell

ATF is red in colour and has a unique sweet smell. It turns darker to maybe orange as it works through the tranny. PSF is however clear, pinkish or amber in colour and smells like burnt marshmallow. It can turn red or brown with time.

Can you mix power steering fluid with transmission fluid?

Now the question lies if you can mix power steering with transmission fluid. As they are both hydraulic fluids, there should not be a problem.

However the problem arises if and when there are specific requirements to be met because of different materials in the system like rubber seals. For example, oils tend to lead to the expansion of rubber.

As PSF has oil and ATF doesn’t, there is a chance of leaks developing if the two are used in systems with rubber parts. So taking this in to consideration, it is generally PSF that may cause a problem, making ATF a safer option.
It’s better to avoid mixing these products unless it’s done accidentally.

There is a chance of the gears not shifting in some car make and models. If in case something like this does happen, then your mechanic may suggest flushing out the system and then filling it with ATF. The best way to avoid any unwanted problems, and to keep your car in running condition is to use the PSF approved for use in your vehicle.

Similarly, while both brake and power steering fluids are important for your car’s performance, and seem to have various similar characteristics, they are quite different from one another.

While both work as lubricants, they lubricate different car parts. Brake fluid helps in powering the vehicle’s braking system, including the hydraulic clutch and brake. It is an effective lubricant and anti-corrosive agent for a vehicle’s movable parts. Power steering fluid is used in the vehicle’s power steering system to optimize its working so that the driver has better control over the steering wheel. It’s a low viscosity hydraulic fluid that’s highly resistant to oxidation.

While brake fluids are usually mineral oil, glycol ether or silicone-based, power steering products are oil-based.The last difference between the two is that brake fluids are in compressible mediums, known for its high boiling point. However while power steering fluids also have a high boiling point, its low freezing point make it a compressible fluid.

However there is no steadfast rule, or any proof stating which the safer fluid between the two is. This is why it’s better to follow your user’s manual, which clearly mentions your car’s needs, and if it’s safe to swap products.

It’s generally better to buy and use specific solutions for the different car systems. Anyway all of these products are easily available at least online if not around you, and both of them are affordably priced.

Can Dexron III be used as power steering fluid?

If you run out of power steering fluid, you can use Dexron 111 automatic transmission fluid as an alternative. Some car models recommend the use of ATF for the power steering.

Can you use transmission fluid as a substitute for power steering fluid?

Nevertheless, the only instance you should use ATF in place of power steering fluid is in emergencies. Automatic transmission fluids come with friction modifiers. Thus, using it as an alternative may end up damaging the power steering pump.

What is the difference between power steering fluid and transmission fluid?

Understanding their difference helps to decide whether it is safe to use ATF in place of power steering fluid. First, ATFs come with friction modifiers that are not there in steering fluids. The additives include cleaning agents that help to keep the transmission clean and healthy.

Also, the modifiers help to cool the transmission when the temperatures go up. As such transmission fluids can work in high temperatures without breaking down. If you use an ATF as a substitute for steering fluid, it may end up destroying the steering pump.

While ATF is used for reducing friction and cleaning the tranny, steering fluid is used for lubrication.

What type of power steering fluid does Toyota use?

Can you mix synthetic oil and conventional motor oil?